Is coffee healthy for you?

This week it’s UK Coffee Week so whether your preferred brew, even during these tough times, is a flat white, espresso or latte let’s see if Britain’s favourite café pastime is really healthy for you.

Caffeine is the first thing that comes to mind when we think about coffee. But coffee also contains antioxidants and other active substances that may reduce internal inflammation and protect against disease. Not only can your daily cup of coffee help you feel more energised, burn fat and improve physical performance, it may also lower your risk of several conditions, such as diabetes, cancer, Alzheimer's, and Parkinson's. In fact, coffee may even boost life longevity.

Along with the well-known health benefits that drinking water can bring, research results compiled in both the UK and Europe showed that coffee (and tea) drinkers who consumed 3 to 4 cups daily had a 20% lower risk of developing disease.

One study conducted at the Institute for Scientific Information on Coffee (ISIC) suggested that the caffeine in coffee stimulates the drinker's metabolism and increases energy level, which may help keep glucose in balance, helping to reduce the chances of developing diabetes among those who drink at least 4 cups of coffee each day.

For some people, it’s the single largest source of antioxidants in the diet, outranking both fruits and vegetables combined.

Coffee is one of the richest natural sources of caffeine in the diet. Caffeine is a stimulant, which is one of the main reasons that coffee is so popular. It gives you a jolt of energy and helps you stay awake when you feel tired.

Listen to your body. Drinking too much coffee may cause adverse side effects. However, this depends on the amount of caffeine consumed and individual tolerance.

How to make coffee healthier

Avoid adding sugar to your coffee. If you regularly turn your coffee into a sugary treat, you might be eliminating its overall health benefits and choose a quality, organic brand of bean.

Cinnamon is a tasty spice that mixes particularly well with the flavour of coffee. Studies show that cinnamon can lower blood glucose and cholesterol.

Cocoa is loaded with antioxidants and associated with all sorts of health benefits, including a reduced risk of heart disease. Try adding a dash of cocoa powder to your coffee for some added flavour. 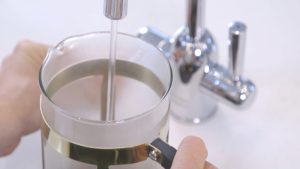 A boiling hot tap, KettleTap, installed at home and at work makes coffee making fast and easy. Instant hot taps produce steaming hot water making fast work at break time. Water quality is so important when making a brew; the taps filter out chlorine and other substances that cause water to have an unpleasant odour or taste.

The temperature of a hot tap can be set below the boiling point so that you don’t burn your beans and affect the taste.

Our love of coffee just keeps on growing! According to research on behalf of UK Coffee Week, a staggering three coffee shops open each day in the UK! The coffee shop industry pours over £10 billion into the UK economy and still growing for its 20thconsecutive year.

It is forecast that the number of coffee shops will overtake pubs in the next ten years. Over 1,200 coffee shops opened in the last year alone, and now there are now 23,000 venues to enjoy a cup comprising the high street big brands such as Starbucks, Costa Coffee and Caffè Nero, as well as many independent coffee houses.

Enjoy a coffee or two in #UKCoffeeWeek and support your local cafes that remain open while they can offering social distancing, hygienic safe measures, and well-ventilated spaces. As with most things in life, it’s all a question of moderation!